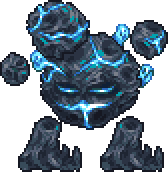 The Overseer is a post-Moon Lord boss, and the final boss of the Spirit Mod. It is intended to be fought after the Moon Lord. The Overseer is undoubtedly the hardest boss of the game, and can pose a serious challenge to most players.

The Overseer does not spawn on its own, and requires the player to summon them with the Spirit Idol. They must be summoned in the Spirit Biome, at nighttime. When summoned, the background will immediately turn black, and all tiles will darken. After the boss is summoned, the player can fight him anywhere.

The Overseer charges at the player very fast, and fires many different types of projectiles. It will summon very large Spirit Portals, which the Overseer can teleport into every few seconds. These portals are placed in close proximity to the player and itself.